Pentacle Medal of the key from Solomon Sixth is Fourth pentacle of Sun, the pendant is double-sided.

This pentacle is used for magical defense, or to be invisible by an enemy, an egregore sent by a third party, etc.

Made of zinc alloy and 925 silver plated.

Below the meaning and the use of the same: 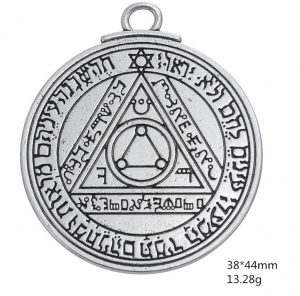 Sixth Pentacle of the Sun. It serves excellently for stealth operations, if done correctly. [In the center the letter Yod in the mystical alphabet, with the Name SHADDAI around it, at the same top. On the sides of the triangle, always in the same alphabet, the beginning of Genesis: “In the beginning God created the sky and the earth, and the earth was formless and empty, darkness covered the abyss. God’s spirit hovered over waters ”. The verses in the circle are from Psalm LXVIII, 23: “Obscuren-oculi eorum ne videant et dorsum eorum semper incurva”, and CXXIV, 6: “Oculos habent et non videbunt”] – Translation: “Let their eyes darken, so that they can not see, and you bow their continuous back “-” Eyes and see ” 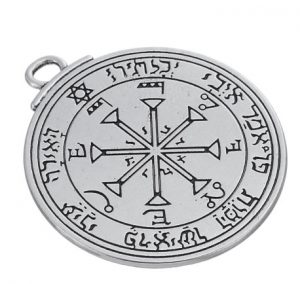 Fourth Pentacle of the Sun. It makes the Spirits visible when they manifest themselves invisibly to those who invoke them: because, when it is discovered, they show themselves immediately. [In the center are inserted the Tetragrammaton, and the Name of God ADONAI, Around, characters in the mystical alphabet. In the circle, a quote from the verses from Psalm XIII, 4-5: “Illumina oculos meos, neither when obdormiam in morte, nor when dicat inimicus meus: ‘Praevalui adversus eum!'”]. Translation: Light up my eyes, because I do not fall asleep in death, so that when the enemy will say: ‘I have won it!

There are no reviews yet.

This site uses Akismet to reduce spam. Learn how your comment data is processed.