Pentacle Medal of the key from Solomon According to And Fourth pentacle of Mars, the pendant is double-sided.

Made of zinc alloy and 925 silver plated.

Below the meaning and the use of the same: 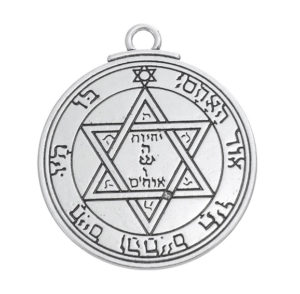 the Second Pentacle of Mars . This Pentacle serves with great success to heal all kinds of bodily afflictions, if applied onlla offended party. [Inside the Seal of Salomone (the six-pointed star , which today is called “shield of David”), around the circle the phrase: “In him life, and life was the light of L’ man”] 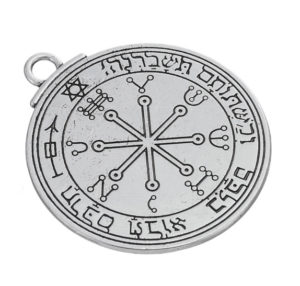 The Sixth Pentacle of Mars. It has great virtue: equipped with it, if someone will attack you, you will not be hurt or suffered damage in the fight with your attacker: his own weapons will turn against him. [In the rays of the central figure, a sentence in the angelic alphabet, Elohim qeber, God there protects. In the circle, a verse from the Psalm XXXVII, 15: “Gladius eorum intret in corda ipsorum et arcus ipsorum confringatur”]

There are no reviews yet.

Show reviews in all languages (1)

This site uses Akismet to reduce spam. Learn how your comment data is processed.

Assistance in English/Spanish/Italian Selene
Scrivimi su WhatsApp
Shopping cart
There are no products in the cart!
Continue shopping
0